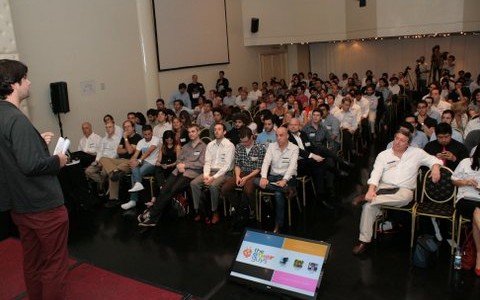 The third “demo day” for NXTP Labs, the leading accelerator for technological start-ups in Latin America, was the most international of all. At this event, 24 companies belonging to the third edition of start-ups in which NXTP Labs invested had the chance to present a pitch in English before a specialized audience of investors. Many important figures attended the event such as Marcelo Sales from Brazilian accelerator 21212, Rogelio Martinez form Mexican Naranya Ventures, Damián Voltes, serial entrepreneur and investor, Gabriela Ruggeri, investor at DMGT, Ariel Muslera from CAP Ventures and Daniel Nofal from Enzyme VC, among others.  The event was hosted by Santiago Siri, one of the most innovative entrepreneurs in the region.

The start-ups represented several countries, mostly Latin American. The pitches were divided into two groups and the first round included:

Guide Centr.al (Ireland, Spain, Argentina), a “how to” guides central presented by Gastón Irigoyen who flew in form Ireland for the occasion. This start-up is also a resident at Dogpatch in Dublin.

Woowup, a Facebook app in order to turn fans into clients; brought by Enrique Novominsky, a serial entrepreneur.

Twyxt (Mexico, United States), the social network for partners, a start-up based in San Francisco that has Bianca Loew, former General Manager at IAB, among its founding members.

Attender (Argentina), the most innovative apps for events, presented by Juan Manuel Abrigo, a serial developer of successful apps.

Rock n’ Roll (Argentina), a publisher of mobile games, presented by its founder Ezequiel D’Amico, who is also involved with the Argentine Association of Videogames Developers (abbreviated to AVDA in Spanish).

Lastroom (Mexico), a mobile app for last-minute hotel reservations in each city. Josue Gio, its founder, flew in especially for the occasion.

The Other Guys (Argentina), a gaming company for the post-pc era presented by Pablo Mayer, who leads a team that was related in its origins to Three Melon.

The second round included:

Logan (Argentina), an advertising network for mobiles that already works with brands such as Coca-Cola and Lan among others.

Hazelmail (United States), delivery of personalized postcards, video presentation from the US.

OM LATAM (Argentina), the largest online marketing community in Latin America that positions digital marketing as “the new English”, presented by Lorena Amarante, its founder and the only woman pitching in the event.

Citaldoc (Argentina), an online calendar that helps both doctors and patients; presented by Diego Díaz who is an entrepreneur and also an anthropologist.

Shopperception (Argentina, United States), revolutionary technology for understanding consumer behavior which was introduced to the audience by Ariel Destéfano, CEO.

Pixowl (Argentina, United States), creator of games such as Doodle Grub and The Sandbox, already financed by Dave Mc Clure from 500startups.

Dinero Taxi (Argentina), an app for booking and paying for cab services presented by Enrique Medina, one of its founders..

NXTP Labs has already presented in three other similar events, two in Buenos Aires and one in Sillicon Valley. These companies are part of the group of 55 investments that took part in the acceleration program.  The company disclosed during the event that 80% of thestartups form previous editions obtained funding within 3 months from Demo Day.