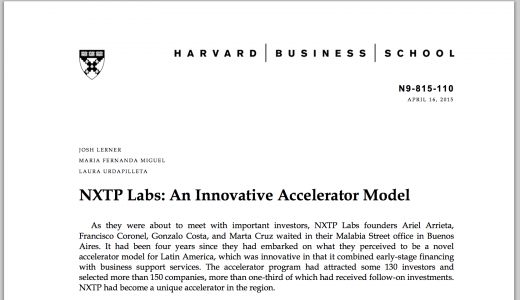 As I have said many times, in terms of studies, I am considered a Serial-Drop-Out, or you can translate that to I have abandoned many degrees.

After I received an Electrical Technician degree and worked for 16 years, I started to study Systems Engineering in the National Technological University. After 3 years, I left that degree to focus on work. Later, I did a CBC in Psychology at UBA and I realized that even though I would never like it, I was going to dedicate myself professionally to that. I abandoned my new degree, and later I tried twice, 3 years each time, to finish a degree in Marketing. I first tried at UCES and after that, University of Palermo. I was always focused on teaching myself, but the first formal training that I finished was what I did at Harvard Business School, as reflected in an old post in this same blog about studying at Harvard Business School, during the Owner/President Management course, where I graduated in 2011.

Today, we announce that NXTP Labs was slected as a case study for this same University. Above all, what gives me the most pride, is that we were selected by Josh Lerner, one of the leaders in the Venture Capital and Private Equity world, and my professor for the 3 years that I studied at HBS.

Reviewing Josh’s biography is incredible. Josh Lerner is a professor of Investment Banking at Harvard Business School and Head of Business Management. He graduated from Yale University with a Special Divisional Major which combined physics with the history of technology. He worked for several years on issues concerning technological innovation and public policy, at the Brookings Institution for a public-private task force in Chicago, and on Capitol Hill. He then earned a Ph.D. from Harvard’s Economics Department. Josh Lerner is the author of dozens of books, but one of the most relevant on public policy on stimulation of capital risk is Boulevard of Broken Dreams, Venture Capital and Private Equity: A Casebook, and The Money of Invention, just to name a few, in addition to the classics that make up any VC curriculum.

Here is the announcement that we made to the press, and below is the video in which Josh explains why he chose us.

I am very happy to be able to share this distinction that highlights what we have done so far and we hope that this inspires others to develop this industry. You can purchase the case study here .