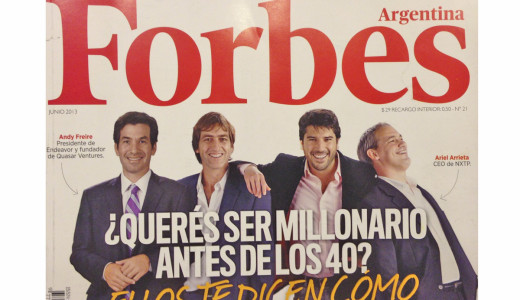 Ariel Arrieta, CEO of NXTP Labs, started as another technological entrepreneur and, eventually, plays the role of angel investor/puts on the angel investor’s suit.

Without incubators and accelerators help, today most of the technology and internet startups that are promising and strongly developing in recent years would not exist. These organizations, usually managed by investors who quit being serial entrepreneurs to act as angel investors, are specifically in charge of detecting innovative projects with potential to become sustainable businesses in a short time. Ariel Arrieta, (40) is one of them. He was an entrepreneur and likes to define himself as an experienced companies’ founder and liquidator/cracker. He created Digital Ventures with Damián Voltes, (who had a similar professional experience) and finally sold it to Fox International Channels for several millions, in 2007.

Today Arrieta is on the other side of the counter: he created NXTP Labs in 2011, the fund/accelerator which is after newborn projects, with great potential in order to inject them with money and make them grow to the maximum in a short period of time. Together with Marta Cruz, Gonzalo Costa, Francisco Coronel and Martín Hazán, Arrieta is focus on the constant unlimited search that aims to have/get/obtain a guaranteed annual return.

“The investor has to think that he will receive between 10 and 20 times more than what he invested within the following five years. And for this to happen, the company should grow up up to 200 times”, explains Arrieta, who also took part in the creation of Nextperience, the digital communications agency that today is managed by Martín Hazán.

Part of the capital earned with Digital Ventures sale and a handful of other companies co-founded by Arrieta, such as Directa Networks, Performa Networks, Afiliados Hispanos e inZearch, helped to support developing startups economically and professionally, as well.

“Each investment period does not extend more than three or four years. Rarely, do we continue investing money if the project so demands it, but it is not the usual thing to do. We start with US$25,000 and, as the project develops, we continue supporting it with what we call follow-on, i.e., we adjust the viagra online without prescription initial investment in order to avoid dilution”, explains this entrepreneur married to Verónica and father of Zoe and Ignacio.

The companies can reach up to US$1 million in investment from NXTP Labs. The fund is made up with the capital contributions of personal or angel investors who, aware of Arrieta as well as the whole founder team professional careers, have decided to invest within “high risk” companies.

The investors’ portfolio is completed by two entities: Corfo, an implementing agency of Chilean government policies within the entrepreneurship and innovation areas, and the Multilateral Investment Fund (FOMIN) from the Inter-American Development Bank (IDB).

According to the investor, NXTP purchases 10% of the shares of each company in which they decide to invest and they do not give it up until its founding partners do so.

Arrieta and his partners pursue the same goal. The technological entrepreneurs aim at investing in 300 companies in five years. “We started two years ago and closed investments in 75 companies. I guess that in the remaining three years to come, we are going to overcome the projected goal” explains NXTP co-owner, the fund that already manages over U$S 40 million and has several investments at hand for the second half of the year.

According to Arrieta, the trend in the global technology market is shifting towards a specific segment, the one related to companies based on the Bitcoin model, the US company that became famous in 2010 for creating a virtual currency and its demand.

Such entrepreneurship not only became popular in developed countries, where it is used as a means of electronic payment in restaurants, supermarkets and all kind of shops, but also as a complex but efficient exchange system between registered users, making it a model to follow.

“Bitcoin is just the tip of a trend that will break the current global financial industry structure, for a start. At present, only geeks bet on this model and understand how it works. This internet business is today what internet protocols TCP/IP used to be in 1999 and 2000. That was the time in which the web servers exploited and site services proliferated in the country”, explains the angel investor before flying to Las Vegas, then San Francisco and finally, New York, to take part in technological conventions and investors’ meetings.

This entrepreneur devotes his free time to Art. He started painting with acrylic and oils on canvas two years ago and has a 160 pictures collection, which he shares in Facebook.

Arrieta is as brilliant and creative as his colleagues but, unlike the other ecosystem members, he has no familiar name. “ I am not a Larguía or a Nofal; I am just a guy from Flores neighborhood”, he jokes naming his colleagues, whom he knows, respect and is or has been partner in many occasions. A “friendly atmosphere” is always a constant within this segment, which stands out for the collaboration between all actors involved.

According to Arrieta, niches for investors in technology companies is becoming increasingly popular. Today, any person has the possibility of investing in startups without having “to belong”.

«The new US legislation is contributing to redistribute people investment opportunities. Previously, only millionaires could access this type of businesses; nowadays, almost  anyone can do so«, Arrieta says.

For him, this is a moment of great opportunity for angel investors. He says that there are many people who have off-shores accounts and could invest by simply making a bank transfer.

The number of projects that are at hand is innumerable. Arrieta is no exception, but all is focus on the ones they find the most appealing.

Before 2013 year-end, they are certain that they will close two potentially prosperous businesses. «We want to buy, at least, 10% of two developing Bitcoin model companie’s shares. They are high risk bets, but with a lot of potential  for change within an industry«, explains the entrepreneur who became a millionaire when tycoon Rupert Murdoch bought 5 of his  companies.

Arrieta analyzes the local market and believes that the sector is going through a great time to do sustainable businesses. «The ecosystem is very good because there is a lot of experience. The local market is the strongest within the region: it boasts creativity and innovation. Entrepreneurs have much experience gained in the dot-com boom. Out of the 300 companies that were created at that time in Latin America, 250 were founded by Argentines«, underlines the inversor.